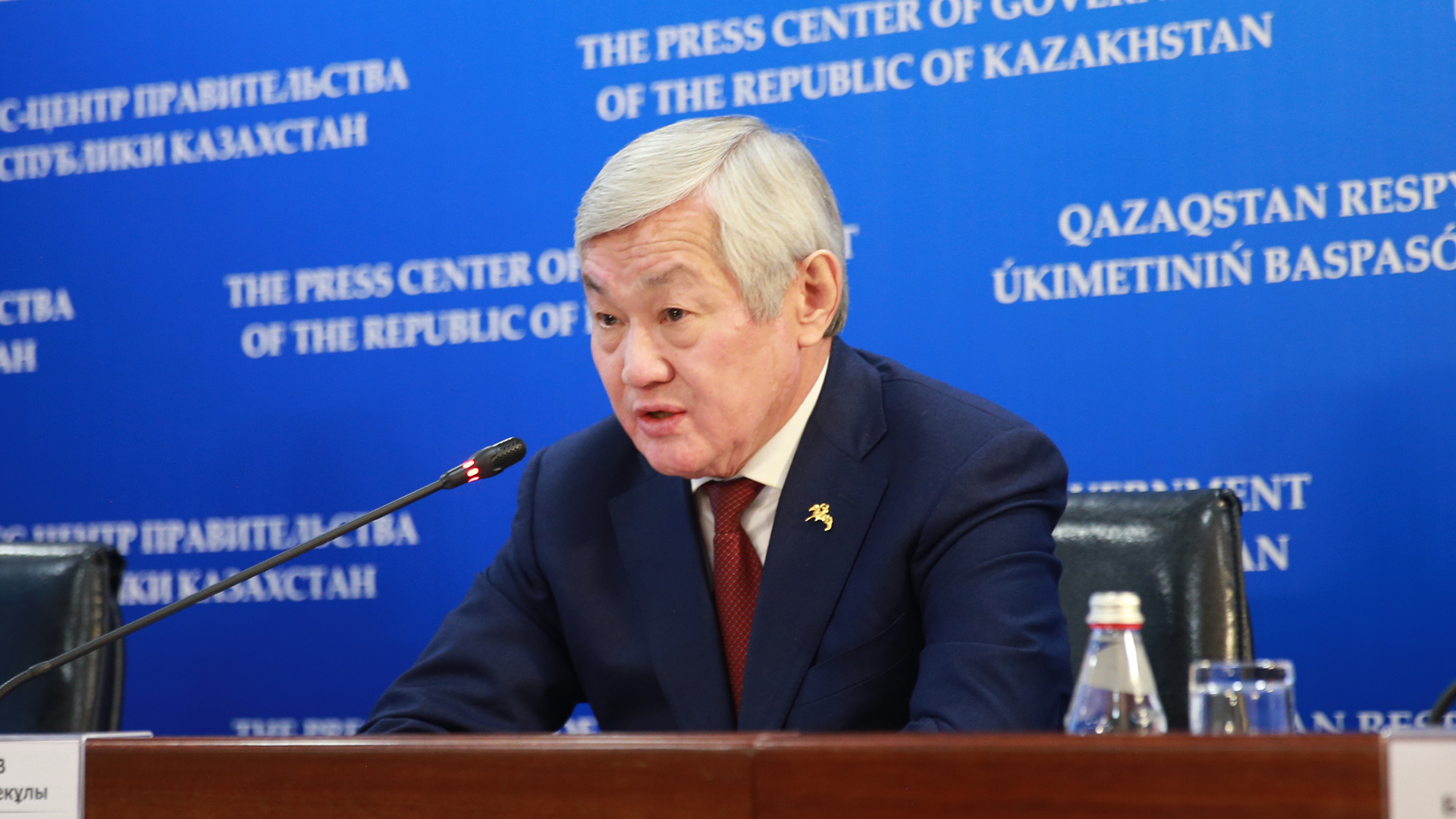 In the press center of the Government, the Deputy Prime Minister Kazakhstan Berdibek Saparbayev spoke about the progress in implementing the instructions of the Head of State in the social sphere and priorities for 2020.

As Berdibek Saparbayev noted, on behalf of the Head of State, members of the Government met with residents of all regions of the country, including in regional centers and remote villages. In total, more than 500 meetings were held, 70 proposals were received from citizens, answers and explanations were given on 2,500 voiced questions.

“The main task of these meetings was to clarify the current state policy and adopted programs to improve the welfare of the population. Most of all, Kazakhstanis are concerned about social issues - employment, education, health care. Of course, we fully answered both in writing and verbally all the questions posed,” Saparbayev said.

The deputy prime minister noted that from Jan. 1, 2019, the minimum wage has been 42,500 tenge. To date, about 1.3 million people receive such a salary. In addition, this year, 1.5 million state and civil servants have been raised wages. On behalf of Elbasy, business leaders also raised their salaries for their low-paid workers by 32%. Thus, in 2019, 1.2 million low-paid Kazakhstanis increased their salaries.

In the coming year, the salaries of 500 thousand teachers will increase by 25%, 215 thousand doctors and nurses by 30% and 20%, respectively. A salary increase of 30% will affect 34 thousand workers of culture, art and archives, as well as 25 thousand social workers.

Pensions of 2.2 million Kazakhstanis are indexed by 7%, state benefits — by 5%. Benefits for 132 thousand recipients of three types of social payments from the State Social Insurance Fund will increase by at least 30%.

“In addition, the Government gave an order, which has been worked out with local authorities, so that they provide additional support. As a result, about 2.2 million Kazakhstanis were covered by additional social support worth 128 billion tenge,” said the deputy prime minister.

Also, the issues of incorrect accrual of the targeted social assistance related to the disclosure of income, the growth of dependency, etc. were resolved. The Government prepared a draft law, which is approved by the Parliament to date.

“The most important question here is whether state benefits will be paid to a large family, while the income of these families will not be taken into account. The targeted social assistance as it was before will be saved. A new type of assistance is a guaranteed social package,” Saparbayev said.

For three years, Kazakhstan has implemented the Enbek state program. Its main goal is to help Kazakhstanis in finding employment. This includes training, the provision of skills in a particular specialty, grants, microloans at low interest rates.

Starting next year, the Enbek state program is expected to change. So, short-term vocational training will be carried out at the request of employers, new mechanisms “First Workplace” and “Generation Contract” will be introduced.

Also in the framework of the third direction of the Enbek State Program for the Development of Productive Employment and Mass Entrepreneurship, it is planned to relocate citizens from labor-surplus regions — Mangystau, Kyzylorda, Zhambyl, Almaty, Turkistan regions, Nur-Sultan — to labor-deficient areas: Pavlodar, Kostanay, North Kazakhstan, East Kazakhstan. This year, about 9 thousand people were relocated from the southern regions of the country to the northern and eastern. To date, about 200 people have been relocated to Ekibastuz from Nur Sultan. They were provided with work and housing. Now this experience is planned to be extended to Akmola and Karaganda regions.

“In general, the share of social expenditures of the budget of our country increases annually. For comparison, I can say that in 2018 this share was 43%, in 2019 — 45%, in 2020 — 50%. This suggests that the policy course of the leadership of our country is social in nature, that is, to increase the welfare of the inhabitants of our country ” Saparbayev said.

According to Saparbayev, it is planned to ease microcredit conditions for large families and low-income families in order to stimulate their entrepreneurial activity. In particular, it is expected to reduce the rate from 6% to 4% per annum, increase the terms for issuing microloans from 5 to 7 years.

About 690 thousand people with disabilities live in Kazakhstan today. 400 thousand of them were able-bodied. In the framework of social protection of persons with disabilities this year, 400 billion tenge were allocated from the budget to pay benefits and provide technical means of rehabilitation. The National Plan for Ensuring the Rights and Improving the Quality of Life of Persons with Disabilities until 2025 has also been adopted and is being implemented.

The list of diseases for which disability will be established for 5 years has been approved, the Roadmap for comprehensive assistance to children with disabilities is being compiled, monitoring of compliance by employers with the quota for the employment of persons with disabilities will be strengthened. To date, about 17 thousand orphans receive benefits. About 1,000 apartments and over 2,000 training grants were allocated to this category.

Next year, the quota for attracting foreign labor will be reduced from 49 to 29 thousand people and the administrative responsibility of employers will be strengthened. Enterprises that attract more than 30 foreign workers will be inspected annually as planned. At the same time, it is planned to significantly reduce the issuance of permits for the 4th category. In addition, there are plans to return the practice of compulsory replacement of foreign workers by domestic specialists.

What has been Done in 2019 in Healthcare?

The State Health Development Program for 2020-2025 has been developed and approved, the main task of which is to improve the quality of the medical services provided.

In addition, a draft Code on People's Health was developed, which is now under consideration in the Majilis of the Parliament of the Republic of Kazakhstan.

Much work has been done to prepare for the introduction of compulsory social health insurance.

“Today we are almost ready. We carried out updating of data of Kazakhstanis, accounting, determination of the status of Kazakhstanis, integration of existing information systems,” Saparbayev said.

Over the 11 months of 2019, about 275 billion tenge was received by the Fund at the expense of employers. The challenge is to collect at least 500-700 billion tenge annually.

As a result of the implementation of Compulsory Social Health Insurance, from next year it is expected that the cost of one insured will increase by 57.5% from 55 thousand to 87 thousand tenge, the development of medical infrastructure, an increase in the level of medical equipment from 70%, an increase in access to high-tech medical care and the quality of care medical services.

1.8 million Kazakhstanis receive free medicines. Each year, 93 billion tenge is allocated for drug provision. To date, the DariKz mobile application has been launched, where you can read the instructions for the drug and complain about its cost if it exceeds the allowed. In addition, electronic procurement and registration of the issuance of drugs is carried out, price regulation for all types of drugs has been introduced, a single contact center 1439 and an SMS newsletter on the receipt of medicines have been launched. There is a complete automation of the drug supply system from need to leave for patients, a drug tracking system is being introduced.

“Until the end of this month, we must ensure the purchase of medicines for the first quarter so that we do not have a shortage of medicines in January,” said Saparbayev.

What Reforms are Planned in Education?

The Government has developed and approved the State Program for the Development of Education and Science for 2020-2025, which provides for measures for 100% coverage of children from 3 to 6 years of pre-school education, solving issues of emergency and three-shift schools, implementing PPP projects with the involvement of private investors.

Work on the optimization of universities. A commission has been created under the Government of the Republic of Kazakhstan. Seven higher education institutions have passed the test. Some universities will be revoked licenses, some will be combined.

With regard to ensuring the safety of children, by Aug. 1, 2020, in all schools in the country, video surveillance cameras will be installed. This does not include remote rural schools.

Until the end of the school year, all schools will be provided with a comfortable environment, i.e. street toilets will be eliminated.