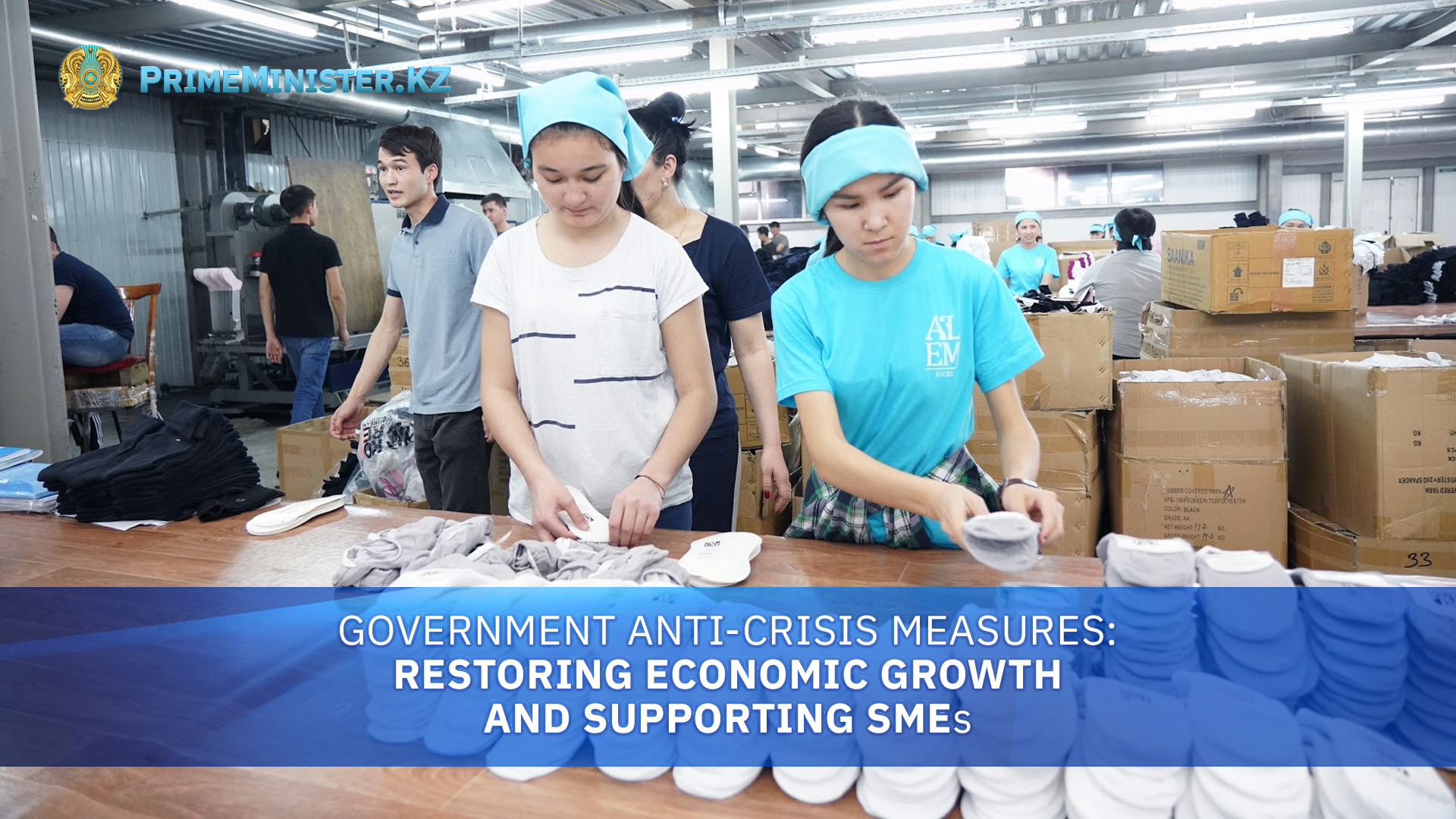 Government of Kazakhstan is implementing anti-crisis measures aimed at supporting socio-economic stability and employment in the country.

According to the First Vice Minister of Finance Berik Sholpankulov, the total package of anti-crisis measures, excluding tax preferences and local support, is 5,938 billion tenge, of which 3,462 billion tenge — from the republican budget, 2,476 billion tenge — for extrabudgetary account.

In particular, 1 trillion tenge is provided for financing the Employment Roadmap, of which 300 billion tenge at the expense of Republican Budget, and 700 billion tenge from extrabudgetary funds. These funds will allow the regions to implement infrastructure projects and create 250 thousand jobs.

“Within the framework of 370 billion tenge from the State Social Insurance Fund, more than 3 million people within 3 months received payments on loss of income in the amount of 1 minimum wage (42.5 thousand tenge). These payments have been fully paid. For the construction of 15 million square meters of housing, an additional 390 billion tenge will be allocated (extra-budgetary funds). Compensation for the loss of tax revenues of the Republican Budget and the fulfillment of all social obligations of the state is 1.7 trillion tenge,” Sholpankulov explained.

237 billion tenge is provided for compensation for losses of small businesses in connection with the provision of exemption from taxes and fees on the wage fund for SMEs and large businesses in the affected sectors of the economy.

“313 billion tenge will be used for additional indexation up to 10% of social payments (pensions, benefits, targeted social assistance), increasing scholarships and reimbursing the population for paying utility bills,” said the First Vice Minister of Finance.

240 billion tenge are provided for the expansion of state programs, of which:

At the same time, 125 billion tenge are provided for anti-epidemiological measures, including additional payments to medical and other workers, for the construction of infectious hospitals and others.

“575 billion tenge of additional costs were aimed at supporting citizens and the economy and implementing instructions of the Head of State, at completing problematic shared construction projects in the city of Nur-Sultan and other priority tasks,” Sholpankulov noted.

Funds in the amount of 66 billion 957 million tenge were allocated from the reserve of the Government of Kazakhstan to combat coronavirus infection. Of these, the Ministry of Healthcare — 46 billion 587 million tenge.

“To date, 191.9 billion tenge has been allocated from the republican budget to fight the pandemic. Of these, within the framework of the budget refinement, 125 billion tenge, from the reserve of the Government 66.9 billion tenge. These funds have a strict target direction and are monitored from the moment of public procurement until the transfer of these funds to the final buyer. Of course, there is also control of the Ministry of Healthcare, which, through the committee for quality control of medical services, monitors how services are provided by hospitals,” Sholpankulov explained.

In turn, the Vice Minister of National Economy Madi Takiyev informed that the forecast for the growth of economic contraction in light of the new quarantine was specified in early April. Following the results of 5 months, the services sector decreased by 6.2%, the production of goods remains dynamic, the growth in the manufacturing sector is 4.8%.

“As for the restrictive measures, they are for two weeks, and they are economically different from the state of emergency. For example, today rail transportation, air transportation, cargo transportation, construction are preserved, small non-food stores are operating in area, and there are other economic differences. That is, today we have a certain volume of services that is being maintained. Moreover, many support measures for the duration of their action were taken with a margin, for example, for tax benefits (until Oct. 1). In general, the service sector will subsequently gain momentum, there is a high dynamics of the manufacturing sector. As a result, there is reason to believe that by the end of the year we can achieve small positive growth,” Takiyev assured.

The vice minister of national economy emphasized that for the current and next year, the forecast is based on a conservative scenario, all current trends are taken into account.

“On the instructions of the Head of State, a number of measures have already been taken, for example, for micro and small businesses there is an exemption from income taxes and a moratorium on audits has been introduced. Also, before Oct. 1, tax exemptions from the payroll fund were introduced in many different sectors, and soft loans were expanded. A comprehensive plan was adopted to restore economic growth and, despite this, in addition to it, measures were taken in June to support business, which envisages 43 measures aimed at resolving current issues of entrepreneurship, including government procurement, treasury maintenance, leasing of agricultural machinery and promotion of goods for export. There is also a special State Commission, which considers all proposals from business representatives, which are accumulated and collected from all regions and considered on the most pressing issues,” Takiyev said.

In addition, as noted by the vice minister, the State Commission adopted a plan in June to support business, one of the measures is the adoption of a special procedure for granting deferrals on business loans individually. A special procedure was adopted by the Agency for Financial Market Regulation on June 15, 2020, and you can individually apply to banks and microcredit organizations for restructuring and deferring loans for a period of at least 90 calendar days.