In 2019, 136 thousand families taken out of poverty — Berdibek Saparbayev 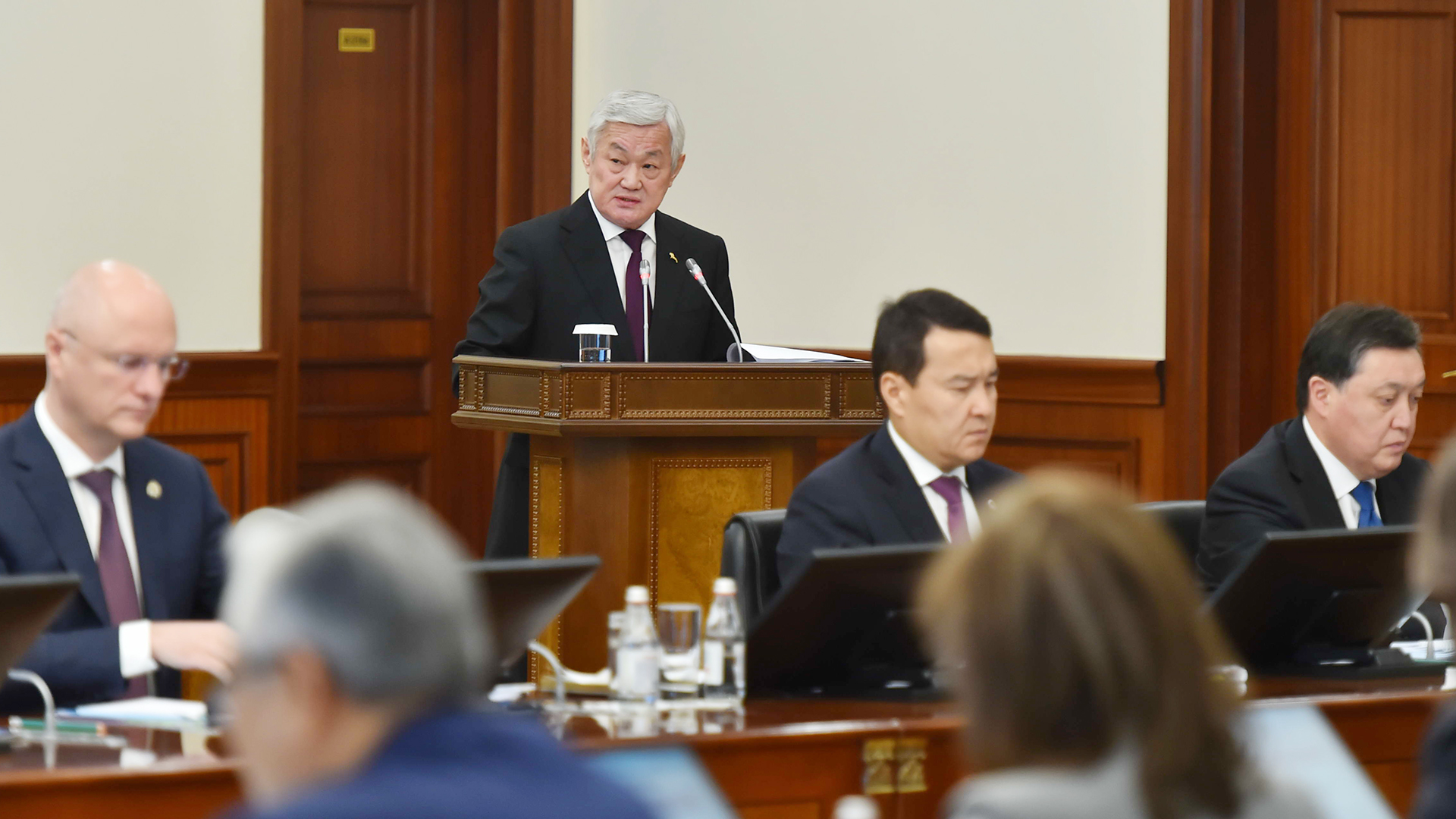 At the extended Government session with the participation of President Kassym-Jomart Tokayev, Deputy Prime Minister Berdibek Saparbayev reported on the progress in implementing the instructions of the Head of State in the social sphere and named the priority tasks for 2020.

As Saparbayev emphasized, in order to fulfill the President’s instruction to improve the well-being of the population, in 2019, the salary of 2.7 million Kazakhstanis was increased. Starting from the new year, the salary of 770 thousand teachers, doctors, workers in the social sphere, culture, art, sports and the archive will be increased by 30%. The size of pensions and benefits increased by an average of 7-20%. For these purposes, the allocated funds were increased by 300 billion compared to last year and amounted to 3.3 trillion tenge. 555 thousand people reduced debt burden, 1.2 million people were charged fines and penalties. For these purposes, 149 billion tenge was allocated from the budget.

In addition, 2.2 million people received additional support of 80 billion tenge from the akimats and sponsors.

One of the tasks set by the Head of State is to ensure employment of the population, including involving low-income and large families in entrepreneurship and providing them with the opportunity to work at home. Last year, measures of the Enbek state program covered 660 thousand people. As a result of this, 424 thousand new jobs were opened, of which 65% were permanent. 58 thousand people received microloans and grants. For the convenience of the population, the Government involved 83 mobile employment centers, 54 private employment centers. As a result of this, the unemployment rate decreased by 0.1% compared to 2018.

A job creation map information system has also been introduced. To prepare specialists in accordance with the demands of the labor market, professional standards have been approved. In order to engage at least 11 thousand families in business, the loan rate decreased from 6% to 4%, the loan term increased from 5 to 7 years. The opportunity to receive a grant without training. Now vocational training will be organized only at the request of employers.

“Given the global changes, we are developing a forecast for the development of the labor market until 2025 and an Atlas of new professions. The electronic labor exchange and electronic labor contract will develop further. For the convenience of the population, we propose combining all measures of state support in the field of social labor into a program of unified social labor,” Saparbayev said.

In accordance with the instruction of the Head of State, a new mechanism for providing social assistance to large and low-income families has been introduced since 2020. From Jan. 1, 372 thousand families paid a fortune in the amount of 17 billion tenge. It is planned that at least 200 thousand families will be provided with TSA. It is noted that if there are able-bodied people in the family and they refuse the offered job, then the TSA will be taken from them. In addition, starting this month, a guaranteed social package will be issued for children from low-income families. According to preliminary forecasts, at least 200 thousand families or 600 thousand children will be reached with this help.

“In 2020, our main task is to provide support measures for at least 800 thousand children from low-income families. Costs for these purposes will be increased by 23% compared to last year. If in 2019, 20 thousand tenge was paid for 1 child, then this year this amount will increase to 26 thousand tenge,” the deputy prime minister said.

In addition, about 350 thousand able-bodied families will be covered by employment measures.

Healthcare: Population spending will be halved

As part of the execution of another instruction of the President — to improve the quality of medical care — a Code of Public Health was developed, which is now under consideration by the Parliament of the Republic of Kazakhstan. The provision of drugs is fully automated. There is a call center 1439. The government approved the state program for health development for 2020-2025. Funds allocated to the healthcare sector will be increased from 3.2% of GDP to 5%.

“The main task of the Program is to increase the life expectancy of Kazakhstanis from 73 to 75 years, the availability of equipment from 73% to 100%, the volume of investments attracted to the healthcare sector to 1.3 trillion tenge,” the deputy prime minister noted.

The compulsory social health insurance system was launched Jan. 1, 2020. To finance contributions for 15 privileged categories or 10 million Kazakhstanis, 317 billion tenge is allocated from the budget. The Health Insurance Fund has accumulated 252 billion tenge. As a result of all these activities, total expenses will be increased by 50%. The number of children provided with medicines will be increased from 600 thousand to 3.5 million. Today, children under five are provided with free medicines. After the measures taken, the age of the children will be raised to 18 years. The expenses of the population will be halved. It is planned to increase diagnostic assistance five times. CT and MRI services will increase at least twice.

“Last year we carried out a large pilot project in the Karaganda region. The results are good. We will continue this work further,” Saparbayev said.

Together with the Elbasy Foundation, the Kamkorlyk project is being implemented. Under this project, 17 rehabilitation centers will be built.

Education: 300 thousand children from rural areas will be supported

At the August conference and in the Address to the people of Kazakhstan, the Head of State paid special attention to improving the quality of education. In order to fulfill these instructions, in 2019 the coverage of children with kindergartens was increased to 98%, the curriculum was updated to 95%. 81% of orphans are raised in families. Since Jan. 1, the scholarship of 246 thousand students has increased by 25%. Today, 50% of students receive updated scholarships.

Also in 2019, a law was adopted on the status of a teacher. The state program for the development of education for 2020-2025 has been approved. As a result, the amount of funds allocated to this sector will increase from 3.8% of GDP to 7%.

Together with the Elbasy Fund, the El Umiti project is being implemented, within the framework of which 300 thousand children from rural areas will be supported through the opening of the Daryn centers.

In addition, the Well-Being Index has been introduced to ensure safety, children's rights, and protect them from violence. To develop competition between universities, a government working group has been created. At the moment, three universities have closed. The case of six universities is pending in court. Work continues at seven universities.

As part of the implementation of the Hearing State Concept, a specially created Government Group has traveled to 17 regions of the country and visited 550 settlements in 8 months. The main issues that worried the population were: increasing income, employment, support for opening a business, improving the quality of education and health services, providing the opportunity to use the services of cultural and sports facilities. Given the above suggestions, a draft concept for the development of civil society until 2025 has been developed. Mechanisms have been developed to increase the activity of society, to strengthen communication between the population and the state. As part of the Year of the Volunteer, about 40 events will be held in 7 areas. Preparations are also being made for the celebration of the 175th anniversary of Abay, the 1150th anniversary of Al-Farabi, the 750th anniversary of Altyn Orda, the 70th anniversary of the Victory in the Great Patriotic War. Funds of entrepreneurs and sponsors will be attracted for these events.

“All your instructions in the social sphere will be fulfilled on time and efficiently and under the control of the Government,” Saparbayev said.