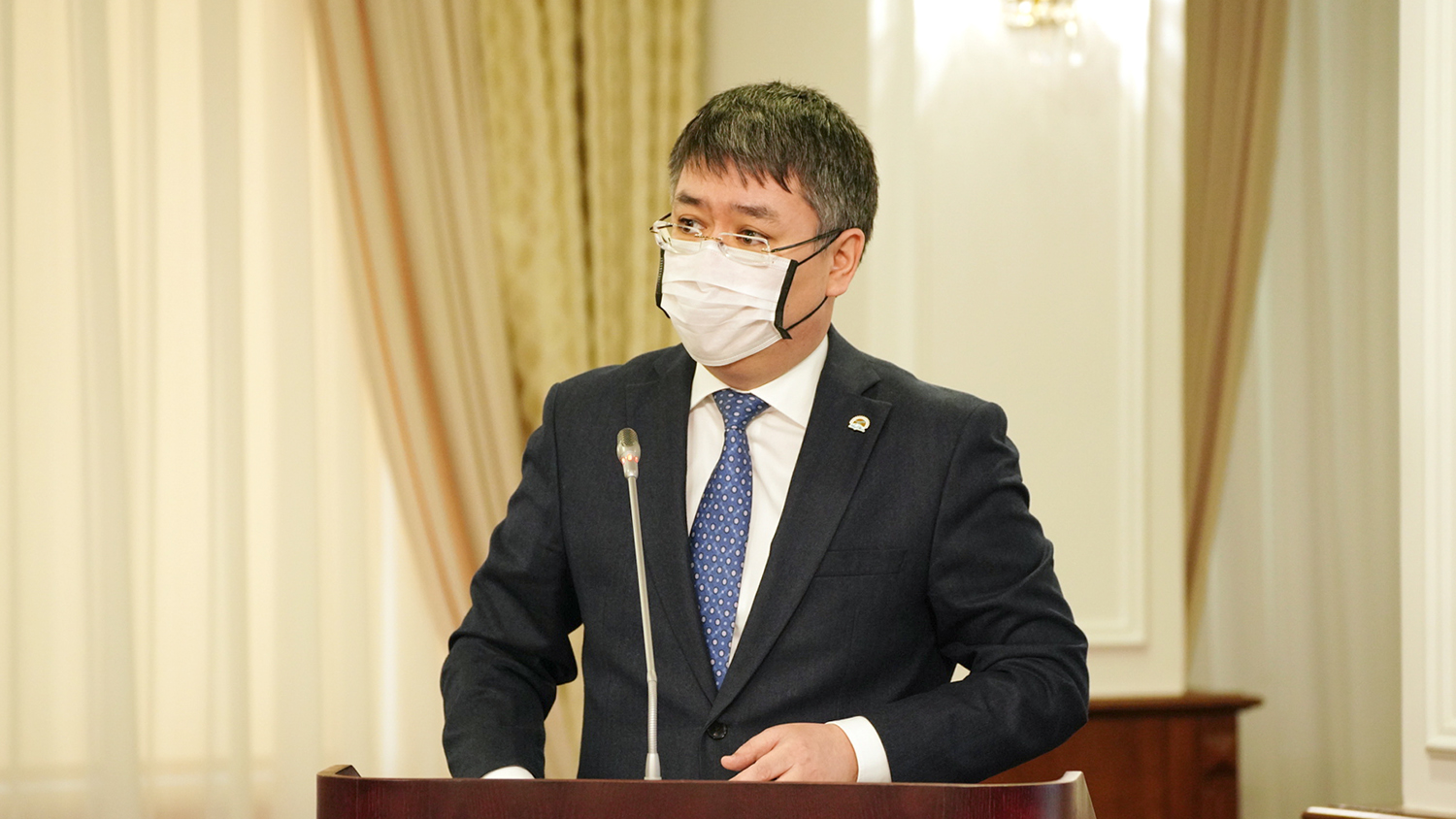 At the government session chaired by Prime Minister Askar Mamin, Minister of Labor and Social Protection of the Population Serik Shakenov reported on the measures taken to ensure employment of the population, Akim of the Karaganda region Zhenis Kassymbek reported on employment and on the implementation of state programs in the region.

So, according to the Minister of Labor and Social Protection of the Population Serik Shapkenov, incl. compared with the past, the gradual recovery of the labor market continues, the main indicators of which demonstrate positive dynamics.

“According to the data of the National Bureau of Statistics, the number of labor force for the 2nd quarter of this year. amounted to 9.3 million people. Incl. the number of employed increased by 73 thousand people. The share of the service sector prevails among the employed by industry. At the initiative of the employer, the number of temporarily unemployed decreased by 12.3 times,” said Serik Shapkenov.

According to the Enbek State Program for 9 months of this year, 377 thousand people have been employed, of which 70% — for permanent work. In addition, 65 thousand people were provided with training.

“In the direction of entrepreneurship support, 29 thousand people received microcredits and grants, of which more than 25 thousand opened their own business for the first time and created about 8 thousand additional jobs. 5.5 thousand people moved to the northern regions. Of the 2.3 thousand migrants of working age, 78% are employed. 39% of the program participants are young people, 50% are women, 53% are from rural residents,” said the minister.

The Enbek program, envisaged by the pre-election program of the Nur Otan party, has been fulfilled by 83%. In Akmola, Kostanay, Pavlodar, Zhambyl regions and the city of Nur-Sultan, all indicators were met in full.

In addition, the election program of the Nur Otan party in the current year the electronic labor exchange in the pilot mode provides for the provision of free online training for 5 thousand unemployed citizens, of which 93% have been trained. To organize online training of citizens, a special portal has been developed and launched on the basis of the electronic labor exchange since July 1. Already, 135 course authors and about 11 thousand users are registered on the portal. After completing the courses, the portal provides for the possibility of passing special testing with obtaining a certificate. For 4 months, 6.6 thousand people took the courses, of which 4.8 thousand were registered as unemployed.

“We will develop online training in specialties in demand in the labor market through the portal within the framework of the newly adopted National Project for the Development of Entrepreneurship,” Shapkenov said.

As part of supporting entrepreneurship in accordance with the electoral program of the Nur Otan party, out of 10 thousand grants provided for young people, 7.6 thousand were issued. Among the recipients of microcredits and grants, 3.2 thousand start-up initiatives were supported.

Within the framework of the national project for the development of entrepreneurship, it is planned to provide tools for supporting entrepreneurship through an online portal on the principle of one window. In addition, 163 master plans will be developed to determine the economic specialization of the districts, state grants and microcredits will be provided in the directions provided for by this master plan. The process of granting state grants will be fully automated, and the effectiveness of the business plan will be assessed. This will eliminate human factors when awarding state grants, significantly reduce the time for consideration of applications for grants. Also, within the framework of the national project, such measures are provided as training in the basics of entrepreneurship until 2025 for 150 thousand people, the provision of non-repayable state grants to youth and socially vulnerable segments of the population for the implementation of 100 thousand new business ideas.

The implementation of the Employment Roadmap for 2020-2021 continues. In total, the interdepartmental commission approved 241 projects, of which 225 projects are underway.

Currently, 7.7 thousand people are employed in the Roadmap projects, which is 68% of the plan. 67% of employed citizens are making mandatory pension payments, the rest are under control. Disbursed 51% of the funds allocated for the Roadmap.

In the Kyzylorda region, 9 projects are planned within the framework of the Palace of Culture. Due to the late start of the tender procedures, work is currently underway on only 4 projects.

“Targeted transfers from the National Fund have been spent only by 13.8%. If in the projects of the Roadmap for the Almaty region it is planned to employ 2.4 thousand people, then today only 84 people are employed,” the Minister of Labor and Social Protection of the Population noted.

Within the framework of state programs and private initiatives, 464 thousand jobs have been created, of which 56% are permanent jobs. Most of these jobs are created through the Nurly Zher and Territorial Development programs and individual initiatives. According to information from central government bodies, within the framework of national projects until 2025, 1 million 750 thousand new jobs will be created.

In order to increase the availability of services in the field of employment, work continues in stages on the implementation of Digital Employment Centers. Since this year, services for registering as unemployed, assigning social benefits in connection with the loss of a job and issuing referrals to subsidized jobs are fully automated through the electronic labor exchange.

From 2022, it is planned to automate the processes of Bastau Business, the provision of state grants, microcredits, on-the-job training and at the request of the employer. Thus, next year, all measures of support in the field of employment will be 100% automated.

At the same time, the pandemic and the new demographic situation present new requirements for systematic work in the labor market. First, the rapidly changing labor requirements. According to experts, in the next 5 years, 40% of the basic skills required by the workforce will change, and there will be a need to retrain every second employee.

Second, demographic risks. In the industrial sector, the process of personnel aging is under way. Only 20% of young people are employed in this area.

Third, new formats of work. Currently, the free income economy, or gig economy, freelancers is rapidly developing. It is necessary to legislatively regulate their activities and take measures to protect labor rights.

Work is underway to develop an online training portal based on an electronic labor exchange, create electronic services for vocational guidance, and support employees in a flexible form of work. A high rate of employment for permanent jobs has been achieved in the Karaganda region.

According to the Akim Zhenis Kassymbek, the region uses the full potential of the Enbek program, the Employment Roadmap and other state programs, which are planned to cover more than 70 thousand people, to provide employment promotion measures.

“The Enbek state program covers more than 31 thousand people, of which more than 20 thousand people are employed in permanent jobs. Employment was carried out according to the vacancies declared in the employment services, registered in the electronic labor exchange. To date, more than 5 thousand enterprises and organizations provide information on the available vacancies. During the year they announced more than 27 thousand vacancies,” the head of the region said.

Work is also underway in other areas of the Enbek program. 1686 people are trained with subsequent guaranteed employment, of which 990 people completed training. 1,745 people trained in the basics of entrepreneurship under the Bastau Business project. 922 grants and 588 microcredits were issued for business development and expansion.

The second and third directions of the Employment Roadmap are being implemented. In the second direction, 222 applications for 1.5 billion tenge were accepted. In the third direction, 4 projects for 1.3 billion tenge were approved at a meeting of the Intergovernmental Commission. In addition, within the framework of all state programs, more than 28 thousand jobs or 130% have been created today, of which 55% are permanent jobs.

“All measures taken to ensure employment will keep the unemployment rate in 2021 at 4.5%. Work in this direction will be continued and is under constant control," summed up the akim of the Karaganda region.