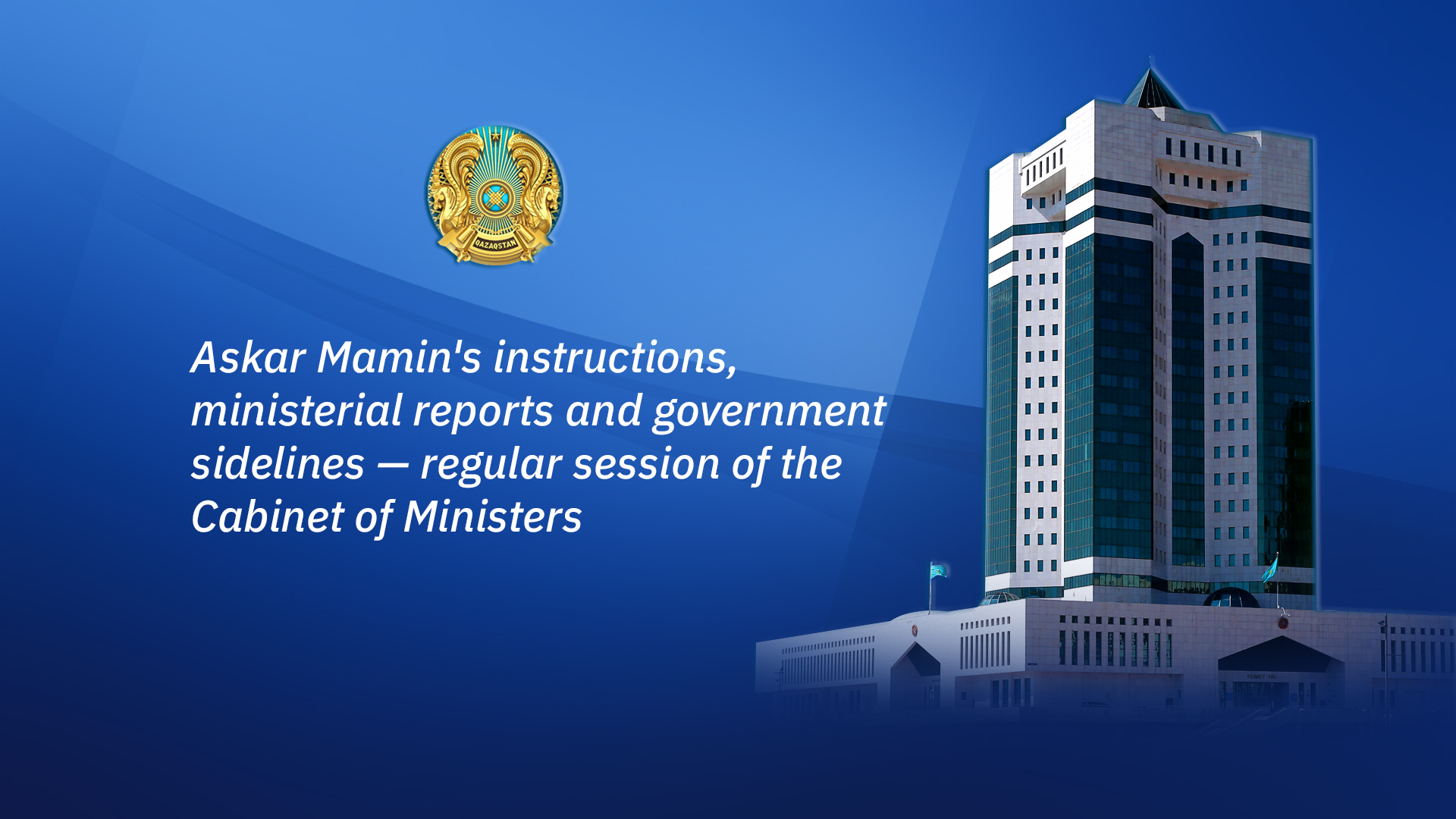 At the Government session held on Tuesday, Feb. 11, 2020, the results of the socio-economic development of Kazakhstan and the execution of the republican budget for January 2020 were summed up, in addition, measures to prevent the spread of coronavirus infection in Kazakhstan were considered. On the sidelines, the main issues of the current agenda were covered, in particular, journalists received answers to questions about the current situation and the progress of investigative measures in the Zhambyl region, the evacuation of Kazakhstanis from China. 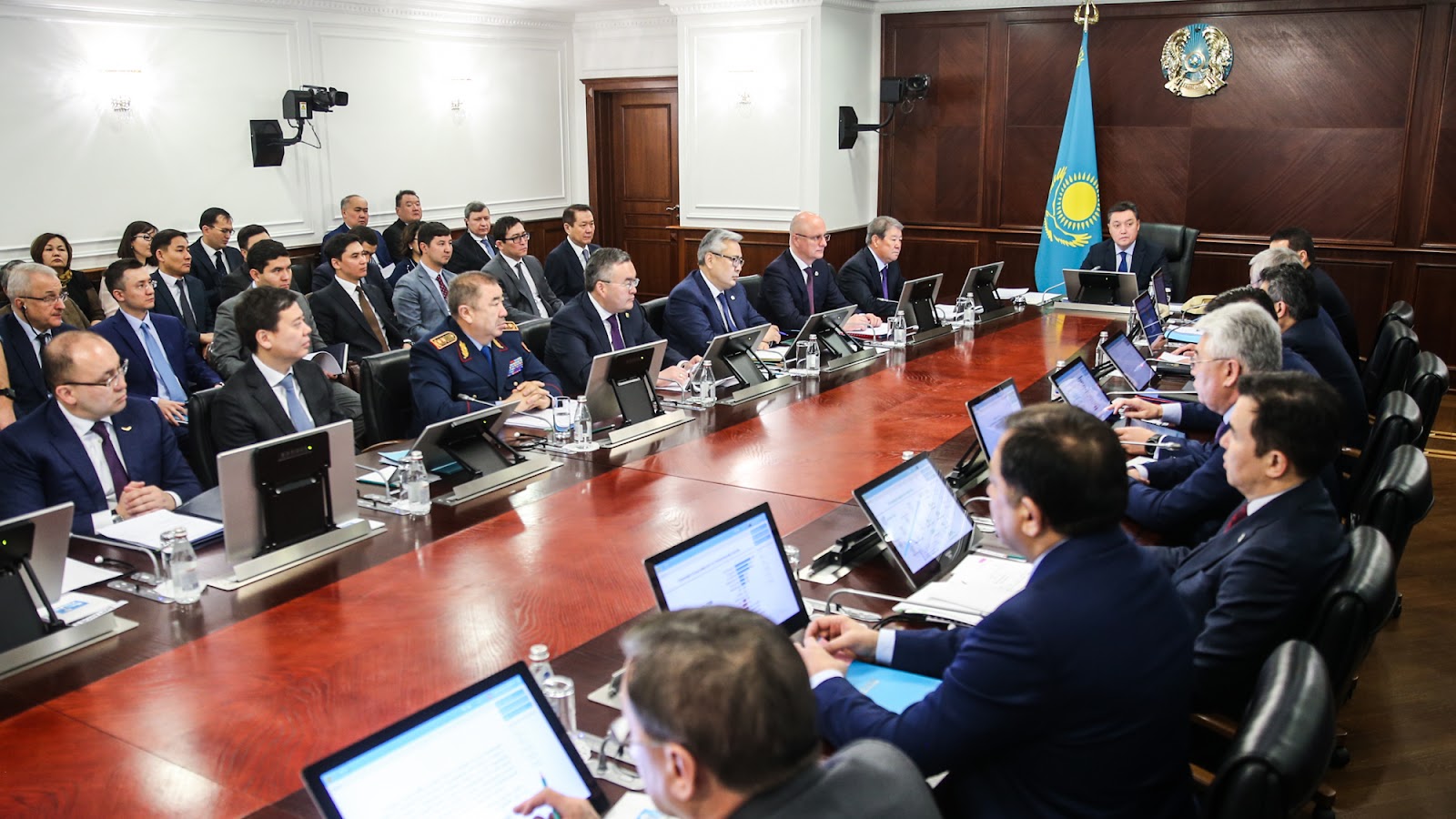 Out of the agenda, the Cabinet was addressed by the head of the liquidation of the consequences of events in the Korday district, new akim of the Zhambyl region Berdibek Saparbayev. According to him, today the situation is stable. Local executive bodies are working with the support of all law enforcement agencies.

Riots took place last Friday in Korday district of the Zhambyl region. Unfortunately, as a result of the tragedy, 10 people were killed, 178 people were injured. Residential and commercial facilities, property of citizens were also damaged.

“Over the past 5 days, 141 people have sought medical help, of which 19 are police officers. 10 people died. The families of the victims were assisted by the akimat and local sponsors. The members of the commission on behalf of the Head of State expressed condolences to each family,” Saparbayev said. 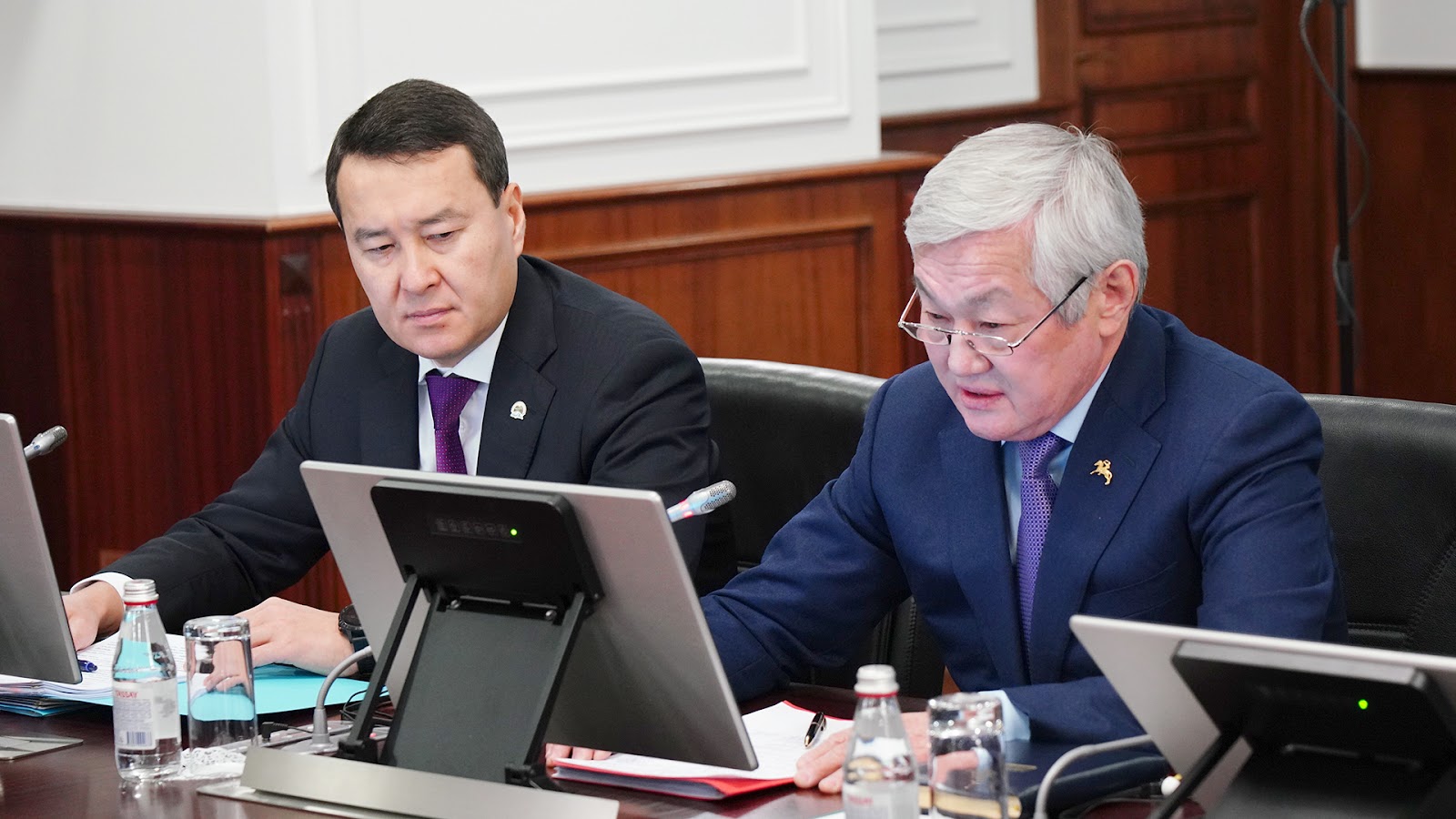 To date, 13 people have been covered by medical care — in the Korday district hospital, 25 people — in Almaty. Ten highly qualified doctors arrived in Korday district from Almaty.

Today, the Government Commission, with the help of the local population, is conducting an inspection and verification of burnt houses and commercial facilities. In the next 1-2 days, the Commission will provide information on their exact number and on what assistance the victims need.

“During these three days we met with the population of all five villages, explained what kind of assistance they would receive. In general, people understand the situation correctly. Yesterday we met with the elders, talked with them,” Saparbayev said.

In three days, some citizens left for Kyrgyzstan. According to Saparbayev, almost 8 thousand citizens returned in two days.

Since yesterday, all schools, kindergartens have been operating normally, and work has begun in all stores.

The prime minister instructed to continue the work of the Government Commission. The government will provide all necessary support.

It is necessary to maintain the set economic growth rate in the current year, starting from the first month — Askar Mamin

During the consideration of the first issue, the prime minister was informed that in January 2020, GDP growth accelerated to 3.6% against 2.9% in January 2019. Investments in fixed assets increased by 3.1%.

Minister of National Economy Ruslan Dalenov assured that positive dynamics are observed in all basic sectors of the economy: growth in construction was 12.5%, trade — 5.2%, transport — 3.6%, in the mining industry, manufacturing sector, including mechanical engineering — 21%, ferrous metallurgy — 17.5%. 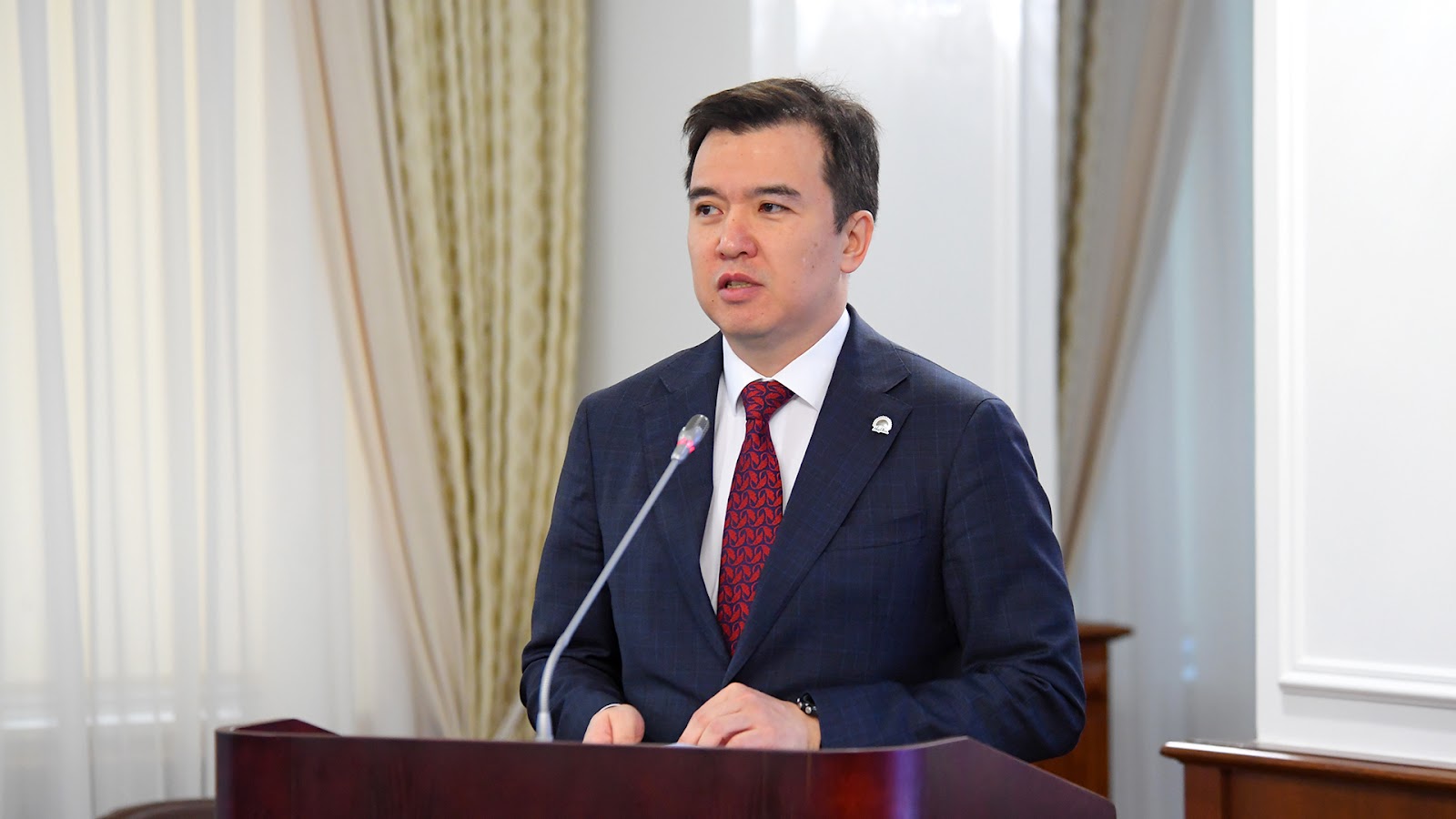 In January 2020, 732 thousand square meters were commissioned. meters of housing. The largest housing commissioning is observed in the cities of Nur-Sultan and Almaty, as well as in the Mangystau region. 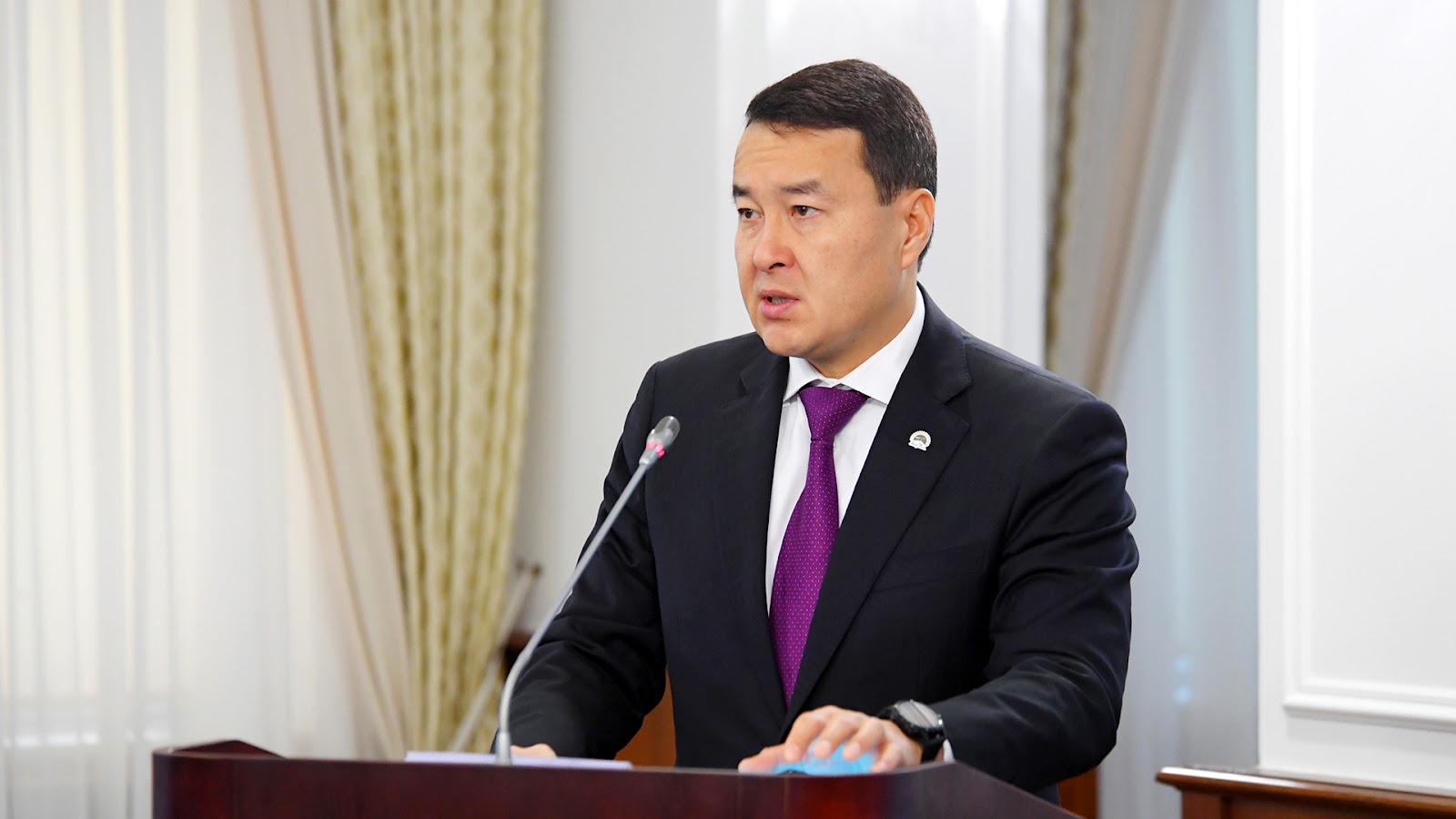 In turn, the Deputy Chair of the National Bank Akylzhan Baimagambetov said that in January 2020, annual inflation amounted to 5.6%. Non-food annual inflation was 5.2% compared to 5% last month due to higher gasoline prices due to higher excise taxes. In these conditions, Feb. 3, the National Bank decided to maintain the base rate and its interest rate band at 9.25%. The current level of the base rate when taking measures by the Government and local executive bodies to increase competition in food markets and pursue an optimal tariff policy will ensure the achievement of inflation targets.

After hearing the speakers, Askar Mamin pointed out the need for leaders of state bodies and regions to strengthen efforts to attract investment, develop small and medium-sized businesses, increase labor productivity and real incomes of the population.

On the second question, the head of government was informed that in Kazakhstan there were no cases of coronavirus infection. In the Republic of Kazakhstan, 134 people were hospitalized with fever and symptoms of acute respiratory infection, 106 of them were discharged with recovery, 28 remain in hospitals. The patients are in satisfactory condition.

According to Health Minister Yelzhan Birtanov, medical organizations continue to monitor the health of citizens arriving from China at their place of residence, 24,167 people are covered, including 1,298 foreign citizens. 8,851 people who arrived from China over the past 14 days remain under medical supervision, the remaining 15,316 were removed from monitoring due to the end of the incubation period.

On the basis of the Central Reference Laboratory, the National Center for Highly Infectious Diseases, together with the National Center for Biotechnology, has developed a diagnostic system to quickly diagnose coronavirus. In the framework of international cooperation, diagnostic systems for 2,000 examinations were obtained from Rospotrebnadzor and purchased from China for 5,000 examinations. 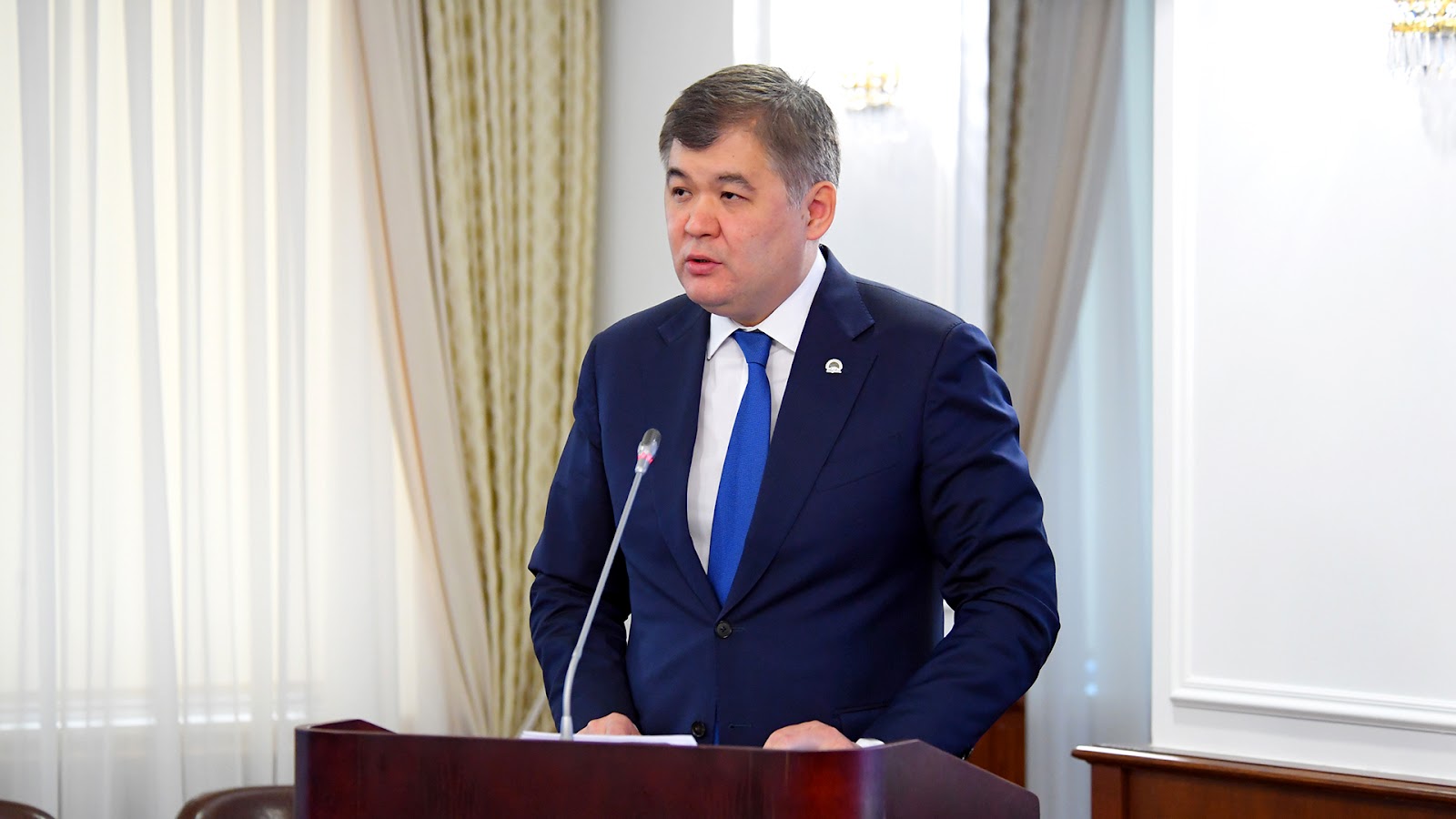 Foreign Minister Mukhtar Tleuberdi, in turn, reported on the work done by the Ministry of Foreign Affairs to prevent the spread of coronavirus in the territory of the Republic of Kazakhstan. 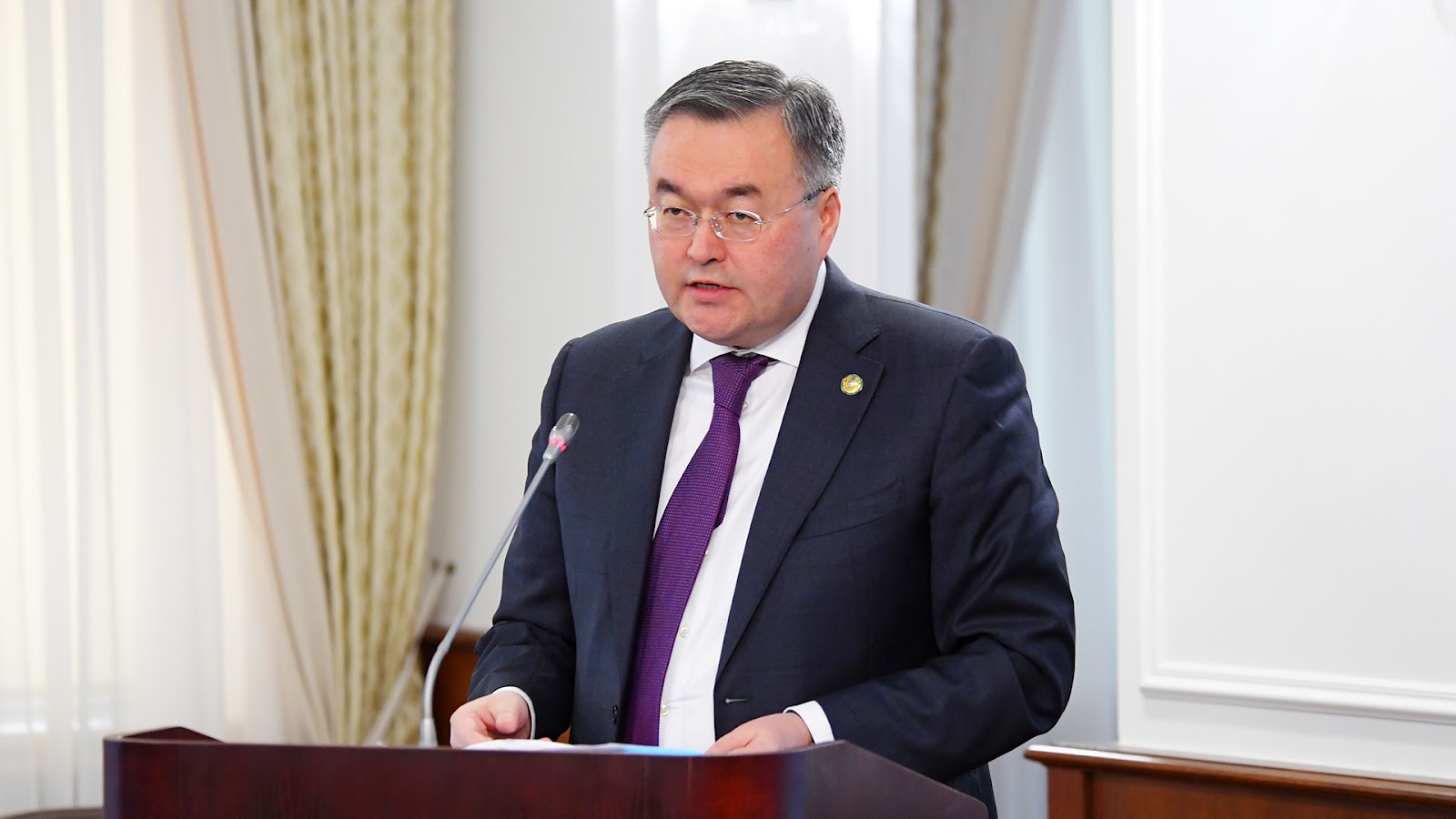 Thus, the Minister of Foreign Affairs informed that the department sent a letter of the President of the Republic of Kazakhstan Kassym-Jomart Tokayev, addressed to the President of China Xi Jinping with words of full support and readiness to provide all possible assistance to China in the fight against coronavirus. The issue of providing humanitarian assistance to China in the form of medical gloves (1 million pieces) and masks (500 thousand pieces) was also worked out.

In addition, in accordance with the requests received through diplomatic channels, assistance was provided in the export of 24 citizens of the EAEU countries. Upon arrival in Nur-Sultan, all of them were quarantined, except for citizens of the Kyrgyz Republic, who were immediately sent to Bishkek.

As a result of the agreements reached with the Chinese side, the flight of Air Astana Airlines on Feb. 11, 2020, 217 citizens of Kazakhstan were transported to Nur-Sultan, another 155 Kazakhstanis will be transported on Feb. 12, 2020 by a similar flight.

At the request of the Chinese side, on Feb. 10, an Air Astana flight transported 43 Chinese citizens from Kazakhstan and the first part of the non-commercial cargo of the Chinese Embassy and the Chinese Consulate General in Almaty. The second part will be exported by land transport.

The Embassy of the Republic of Kazakhstan, together with the Ministry of Education and Science and universities of the People's Republic of China, is working to provide Kazakhstanis with the necessary medical supplies and food.

To date, on the recommendation of the Ministry of Foreign Affairs, 450 citizens of Kazakhstan have independently returned to Kazakhstan.

Askar Mamin instructed the Ministry of Healthcare to continue the implementation of sanitary and epidemiological control, and the Ministry of Foreign Affairs to maintain close contact with the Kazakhstanis in the PRC and provide the assistance they need.

The prime minister drew the attention of the antimonopoly authorities and the Ministry of Health to certain facts of artificially inflating prices for medical masks and antiviral drugs in pharmacy chains.

“Deal with this. In general, the Ministry of Healthcare and regional akims should keep the situation under constant control,” summarized Askar Mamin.

On the sidelines, the head of the investigation department of the Ministry of Internal Affairs Sanjar Adilov reported that more than 25 criminal cases have been initiated by the territorial divisions of the Zhambyl Regional Police Department under the following articles of the Criminal Code of the Republic of Kazakhstan: mass riots, organization and participation in riots, calls for participation in mass riots. 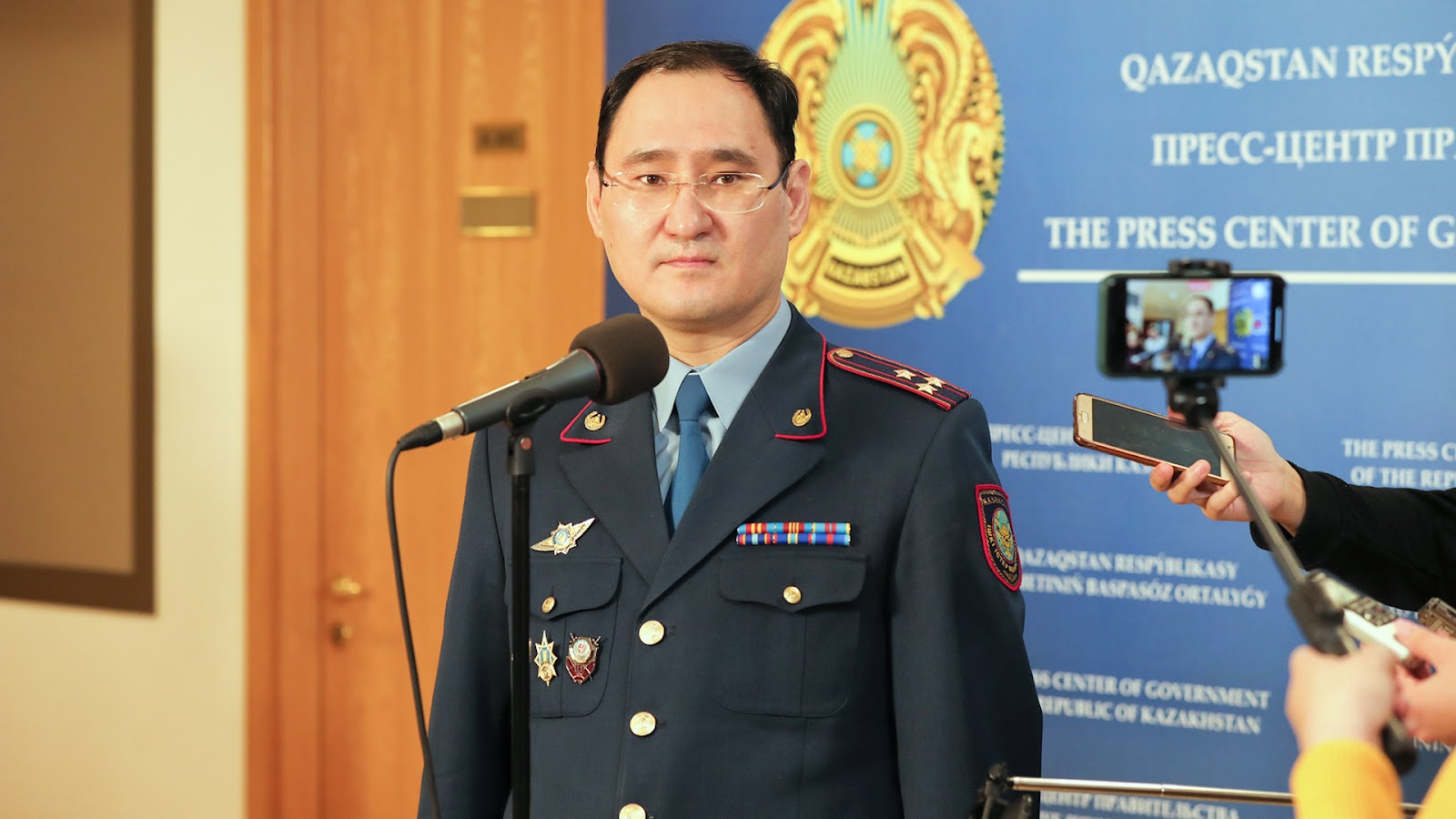 Unfortunately, Article 201 of the Code of Criminal Procedure of the Republic of Kazakhstan prohibits the disclosure of preliminary investigation data at this stage. Urgent investigative steps are being taken. The course of the criminal investigation is under constant control of the leadership of the Ministry of Internal Affairs and the General Prosecutor's Office. 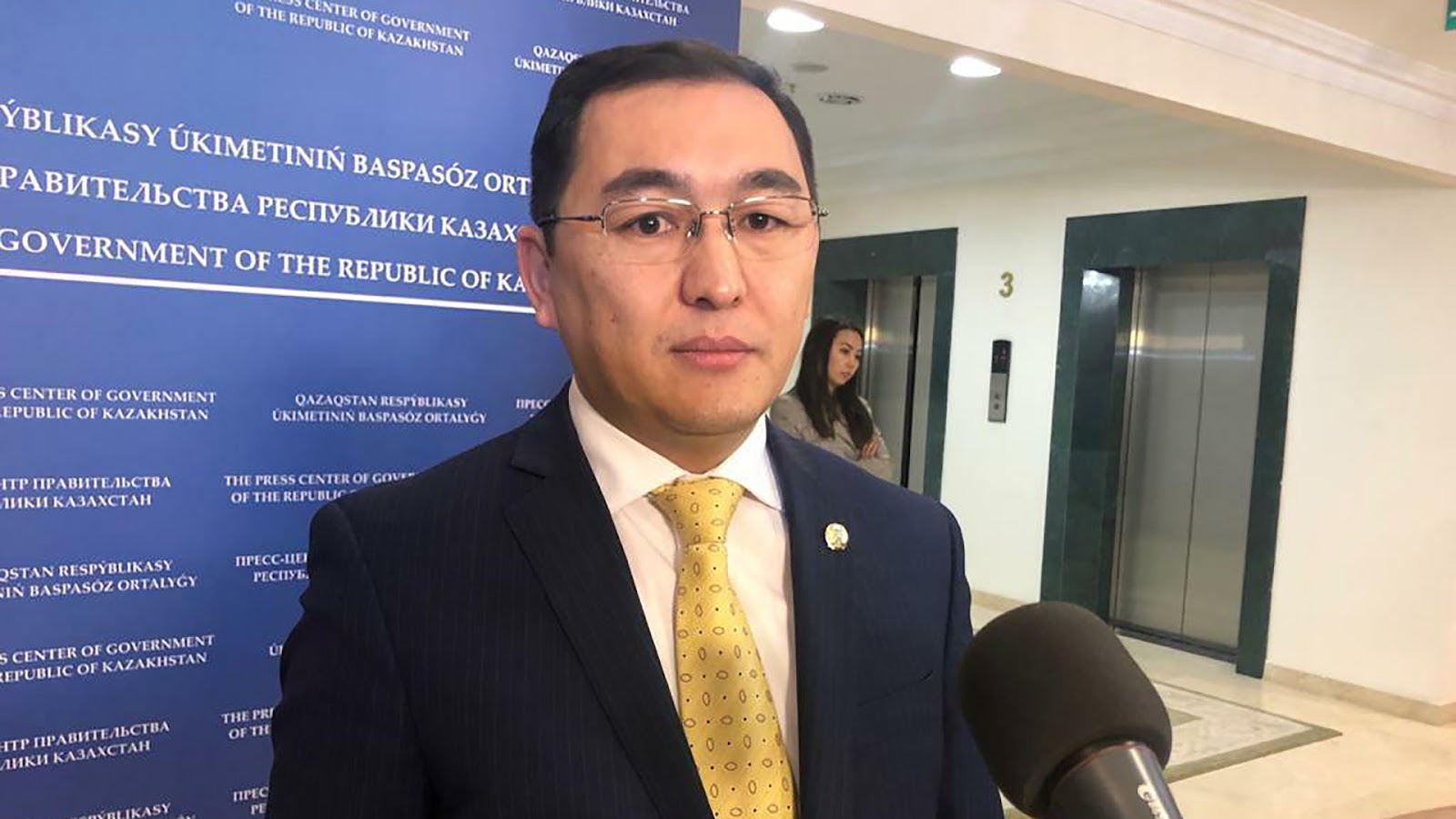 The Official Representative of the Ministry of Foreign Affairs Aibek Smadiyarov informed that tonight, the efforts of Kazakhstani diplomats organized the transportation of 217 Kazakhstani citizens from China. These citizens were gathered from 36 cities in China, mostly students and five babies.

“In the near future, on Feb. 12, we will send another Air Astana plane, which will take about 150 citizens from China. A few hundred more Kazakhstanis remain in China, who have expressed a desire to stay. These are diplomatic workers and members of their families, our students and other citizens who work there. The rest of the Chinese cities are not quarantined, therefore, our citizens can return to Kazakhstan through third countries,” Smadiyarov said.

Saparbayev on the sidelines also emphasized that all necessary assistance to families who have lost breadwinners will be provided.

“A lot of residential buildings were damaged, there was a fire, so a man-made emergency was declared in order to restore order and bring it into line. This emergency does not fall under the social. Mostly man-made, because we must restore all residential buildings, retail outlets, roads should be cleaned, streets and so on. There is no social character here, the only thing is that the families of the deceased and those who lost their breadwinners will be provided with social assistance in accordance with the law,” he said. 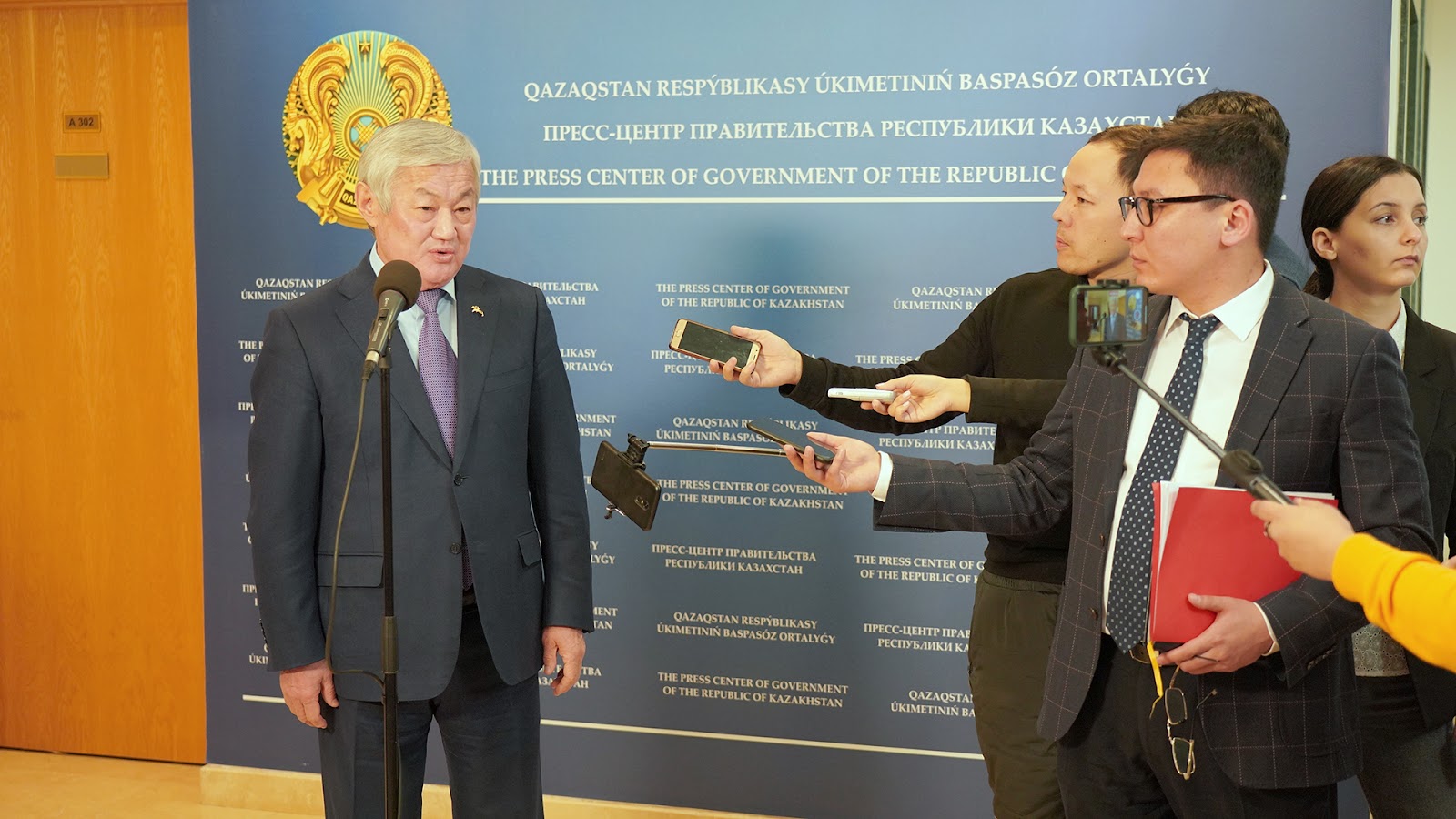 According to him, right now it is impossible to name the exact amount of the damage caused.

“The working group is working, checking all residential buildings, retail outlets where there is damage. I think that just the other day we will determine the amount of damage and proposals will be submitted to the Government. In addition, as I said today, we are now working with entrepreneurs, immigrants from these settlements, so that they also provide support, assistance to victims and families,” Saparbayev said.